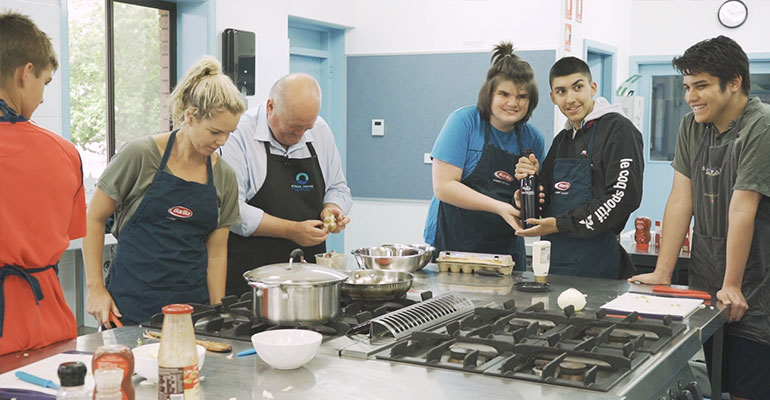 Lee spoke to the students about budgeting and menu planning. He empowered students with the skill of making a meal from the pantry. Lee and the students cooked two delicious meals together. A number of the students were quite shocked at how tasty their meals were! Lee shared with the students how to save money by preparing meals ahead of time and freezing for future use, thereby avoiding the trap of take away food.

Dunlea’s Lead Teacher Joel Hamill said “Independent living skills is such an important part of our social skills program. Mr Evans has been incredibly generous with his time and energy sharing with our students. I have to admit learning how peel onions without crying is a new skill for me also!”

”It’s about the kids being able to have the confidence of being able to say to them, they’ve got a couple dishes that they know how to cook, so that they can go home to mum and dad and actually let mum and dad sit down and they cook the meal, I think that’s a great advantage. The other thing is the pantry cooking. Not having to go out and buy special ingredients that you open the pantry door, pull out the stuff and turn that into a nutritious meal.” 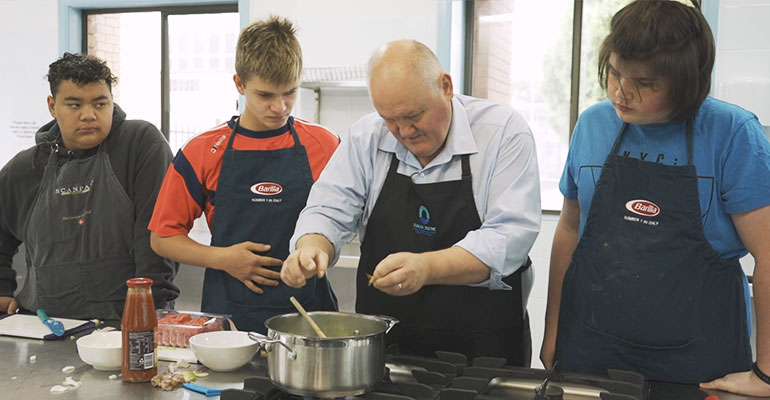 “This series, ‘Life Lessons With Lee’. Can you explain what that’s about?”

“Well that could go quite pear shaped, but ‘Life Lessons With Lee’, it was a bit of a scenario that we came up with to try and help the kids at Dunlea be able to be a little bit more independent as far as what they’re eating instead of going to Maccas and Kentucky Fried, that they can actually prepare a meal which is nutritious and easy to cook. On the day, I did a couple of easy recipes which you don’t really need a recipe you just need to follow the ingredients, you don’t actually need to have grams and kilos it just comes together.”

“One of the things that is important, if you eat seasonally it is a lot cheaper. At Dunlea, they’ve got a vegetable patch – I encourage the kids to get that reinstated and start growing some of the fruit and veggies that they can consume, because when the veggies are in season, they’re a lot cheaper than when they’re out of season, and if you can create recipes and meals out of those foods when they’re pre-levant. It’s a lot cheaper and a lot easier to get those fruit and veggies. The other thing with that is that obviously when they’re in season, they’re prime as well, so they taste a lot better and richer.”